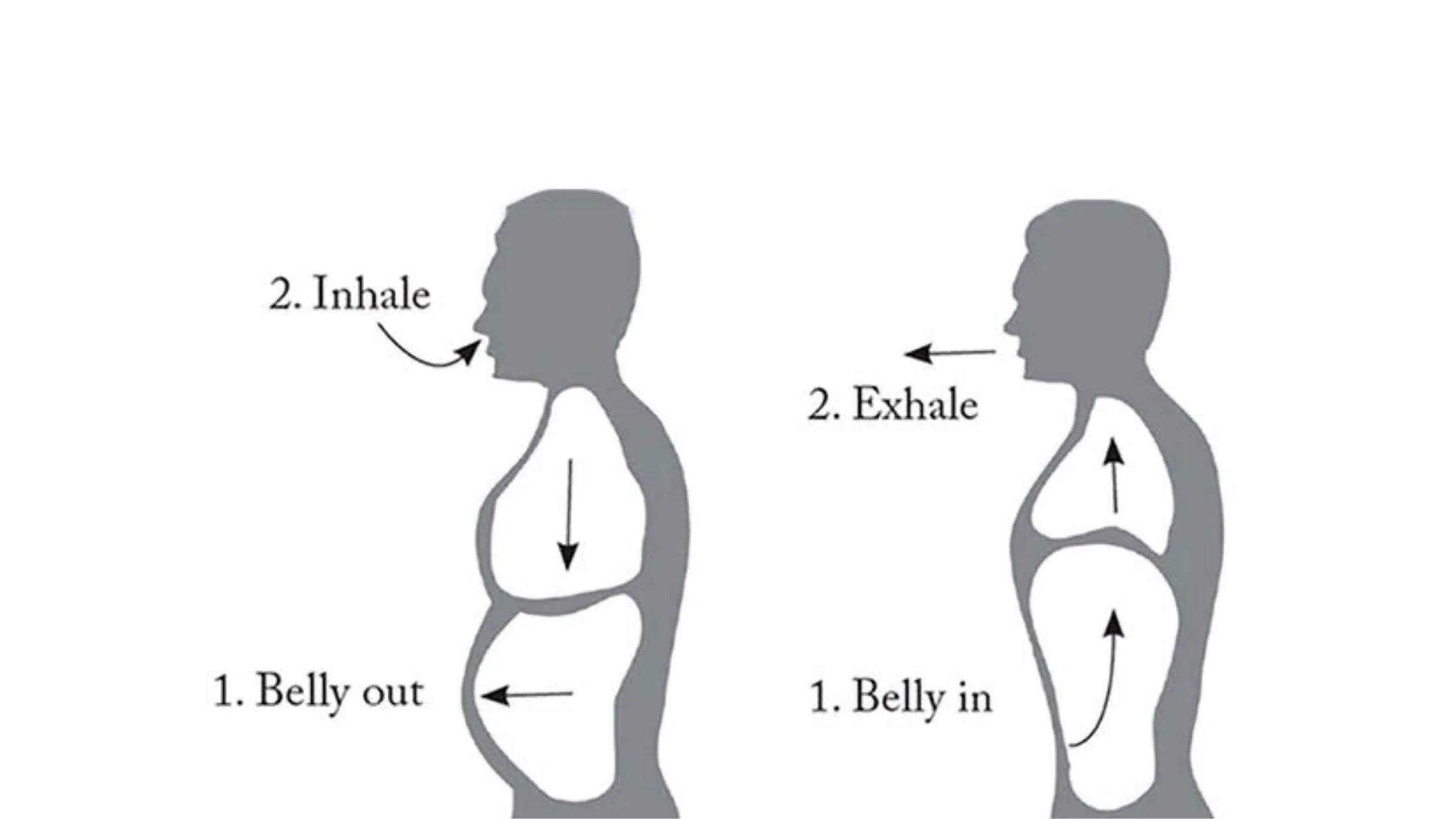 If a pattern of breathing has been disturbed for any length of time, clinical experience suggests that normalization of the muscles and joints associated with the breathing process frequently require primary attention, before normal breathing patterns of use can be restored.
Yamaguti, Claudino, Neto, 2012  Diaphragmatic breathing training improves abdominal motion during natural breathing in patients with chronic obstructive pulmonary disease. Archives of Physical Medicine and Rehabiliitation 93  (4) 571-577.
From an enlightened medical doctor. "Mr. A has had an injury to his diaphragm -- inability to function properly --adversely affecting his breathing. There is no established medical treatment for this condition and patient has been encouraged to seek any and all alternative treatment modalities.
"Good advice but yikes on the many sources of mediocre to bad information sources that are out in the world these days. Breathing exercises are a dime a dozen and many actually worsen breathing by restricting diaphragm function.
The diaphragm is the central muscle of the human body, the principal muscle of your breathing. It almost completely separates the body in half from top to bottom. Ancient Greece called the diaphragm phrenos, "the unity of all possibilities of human expression".
The diaphragm does not activate as one muscle but rather its individual parts can be active at different times. The diaphragm shrinks and as it shrinks it will rise one side the other or both less and less up in to the chest.
Liken it to a bicycle pump.  If you pull the handle out just a little you get very little air into the tire. The higher the diaphragm rise the higher the pump handle can rise and the more air it can push/pull into the tire/lungs.
It shrinks irregularly as  well.This happens with almost every lung issue. I have had video fluoroscopes of MY diaphragm. It was fascinating.  The MD radiologist was kind enough to let me x-ray my diaphragm but did not have a protocol for this which suggests to me  a lack of clinical research into diaphragm function and development.
“A weakened diaphragm causes increased resting tone in upper rib cage muscles such as the scalenes, upper trapezius, levator scapula, and pectorals. The latissimus dorsi, pectoralis major and minor are not typically thought of as accessory muscles of breathing, but may be recruited in faulty movement patterns such as paradoxical breathing, where the abdomen moves in on inspiration and out on expiration.
This common muscle imbalance pattern creates shoulder girdle protraction, forward head carriage, and decreased lumbar lordosis. Forward head posture may result in significant suboccipital and cervicothoracic pain, as these areas are now asked to bear excessive loads to compensate for the hyperkyphotic t-spine.”  Eric Dalton
Your heart rests over it. Your liver, gall bladder spleen, stomach and kidneys lie below it. It is attached to your spine as it moves and massages (hopefully) all your abdominal organs.
Your diaphragm is the mediator of all the biological and emotional rhythms of your body. Including the autonomic nervous system. The diaphragm interconnects your abdomen, lungs and spine.
The rhythmic movement of your diaphragm is changing constantly. It is shaped like a half dome arching into the cavity of your chest . As you inhale it contracts down pressing on your organs and hopefully with a proper deep in-breath.
But the diaphragm shrinks, inappropriate muscles get in its way and the rib cage tightens up.  And when it does it loses some or most of its air drawing and exhaling ability. It is then that much of the so-called diaphragmatic breathing technique really ISN’T full breathing.
Think of the diaphragm as a face down half-dome shaped bowl like a fresh half plum that can weaken and shrivel up on the top and all around its sides like a prune. This means that the diaphragm is effected on ALL sides of it. It can weaken on any part of its bowl shaped surface.

See the diaphragm right above this picture and note how the stomach (in pink) is directly underneath the diaphragm. With food in your stomach, you can not breathe as easily.  Food also lowers your blood oxygen.

Diaphragm goes up on exhale and down on inhale. The higher the UP the more "excursion".  Animation is in stages to save money making it. It should really be smooth.
False Diaphragmatic Breathing
When the person believes they are breathing diaphragmatically but either the accessory breathing muscles are overworking or the ribs are doing most of the work. Belly breathing is another possible source of confusion as the belly breath is only part of an optimal breath.
Conscious Breathing?
With the recent "new age" popularity of daily conscious breathing exercises, many are being trained to either breathe into the belly, consistently watch their breath, create postures that are supposed to expand the breathing (many do, many do not), or forcefully inhale or exhale in an attempt to increase breathing rate or volume.
The belly breath can stabilize the nervous system and emotion and is generally a good place to begin strengthening. But I have seen many exceptions to this as improperly trained belly breath can also become an habitual distraction and breathing restriction.
Watching the breath is good for many to focus and get calm but can develop into self- conscious breathing. Postures can expand or distribute the breath as well as cause the breathing restriction they hope to eliminate. The forcefulness/effort can be valuable but is in many ways asking for long term restriction and imbalance. There are primary markers for positive change of the breath.
Many techniques exist to modify, direct or observe the activity of the breath. Each has its purpose and limitations. Any one exercise you do with the breath will, after enough repetitions, restrict its freedom and ease.
When we forcibly take deeper belly breaths we also partially stimulate the sympathetic nervous system because we are efforting the activity. When practicing breath awareness, observation of the breath may cause it to change and that in itself is a form of assessing for UDB.
Breath awareness is more of a sitting or walking meditation and a pretty good one except I have had clients tell me that to follow their breath made them extremely anxious and others that just couldn’t do it due to stress, internal distractions and UDB. PLUS it too often takes a VERY long time to improve the breathing that way. I counsel to improve the breathing FIRST, THEN try the breath awareness.
The diaphragm is much more than a mechanical shifter of air. It is, above all, a muscle of emotional expression. Most people have had experiences of just how infectious it can be when someone nearby suddenly and spontaneously laughs or yawns. We usually laugh or yawn right along with them.
Why? Because there is both a physiological and energetic  response in the diaphragm that causes it to react in sympathy with what is being expressed by someone else. Singing for instance, relies on the importance of wanting to express emotion. If the diaphragm is thought of only as a pump then such thinking will greatly diminish the function of it and limit its invaluable contribution to vocal expression.

Overview of the Turbo Oxygen System

EWOT ON STEROIDS Based On Oxygen Multistep Therapy aka OMT

Accelerating wellness, physical endurance, mental clarity and more. People today are more health conscious than ever. Men and women have always used the gym as a social venue as well as a fitness venue, but many of these people that used to belong to gyms now find it easier and more convenient and lately even gas saving to work out at home with store bought equipment.

You know the feeling when you actually wake up early to workout?