Asthma is a condition in which a patient's airways are inflamed, become narrow, or swell, leading to extra mucus formation, making it even more challenging to breathe. Asthma could be a minor ailment, or it could be acute, interfering with daily activities. In some cases, it might be a life-threatening attack.

The most common asthma symptoms would be difficulty in breathing, chest pain, cough, and wheezing. The symptoms may sometimes flare-up.

Exposure to an allergen or trigger causes a characteristic form of airway inflammation in susceptible individuals, exemplified by mast cell degranulation, the release of inflammatory mediators, infiltration by eosinophils, and activated T lymphocytes. Multiple inflammatory mediators may be involved, including interleukin (IL)–3, IL-4, IL-5, IL-6, IL-8, IL-10, IL-13, leukotrienes, and granulocyte-macrophage colony-stimulating factors (GM-CSFs). These, in turn, incite the involvement of mast cells, neutrophils, and eosinophils.

Here's a diagram to understand asthma and its effect on our cells. 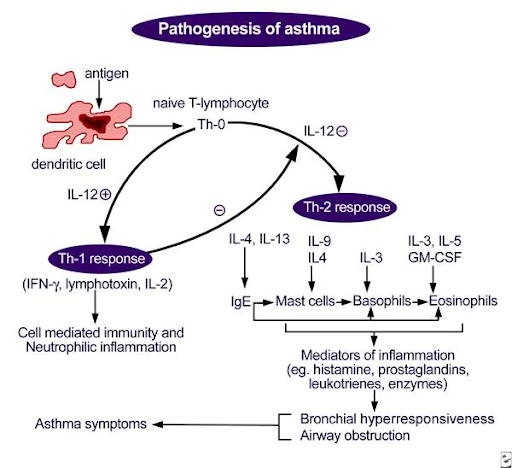 Figure depicting antigen presentation by the dendritic cell, with the lymphocyte and cytokine response leading to airway inflammation and asthma symptoms.

To the layperson, hyperventilation is associated with ''panting'' and is connected with ''panic attacks. So, in a clinical setting, it often comes as a surprise to patients to find that their unobtrusive and habitual breathing patterns are hyperventilating and are responsible for a wide range of physiological and psychological disorders.

As said earlier, panic attacks have a significantly less physiological or genetic footprint. Hyperventilation could also be termed as over-breathing. It could have causes that are not due to any underlying disease. When you breathe, you inhale oxygen and exhale carbon dioxide. Excessive breathing may lead to low carbon dioxide levels in the blood, which causes many of the symptoms you may feel if you hyperventilate. The causes could range from exercise to nausea, panic, or anxiety.

Also Read: Is there anything like too much oxygen?

The Link Between Hyperventilation and Asthma

Psychological factors such as fear, panic, anxiety, stress, and depression could exacerbate bronchoconstriction and cause hyperventilation. In the early stages of acute asthma, hyperventilation may result in respiratory alkalosis. It is a condition that can dangerously predispose the body's smooth muscular tubes (arteries, the lining of the lungs, etc.) to spasm, increasing blood pressure, restricting breathing by an ''asthma'' type attack, and by coronary artery spasm, increasing the likelihood of a heart attack.

This excerpt from a research paper becomes particularly relevant here.

Asthma vs. Hyperventilation in Children (and adults). IOWA CITY, Iowa –

Almost 10 percent of all children have asthma that is characterized by wheezing, coughing and shortness of breath.

In some cases, adolescents diagnosed with exercise-induced asthma may not have asthma at all but exercise-induced hyperventilation. The findings were published in the June issue of the Annals of Allergy, Asthma, & Immunology.

"Asthma is clearly the most common cause of exercise-induced shortness of breath and needs to be appropriately treated," said lead investigator Miles M. Weinberger, M.D., UI professor of pediatrics and director of the UI pediatric pulmonary and allergy division.

"But the bottom line is it's not the only cause of labored breathing during exercise. Our study showed that some children who were initially diagnosed with asthma were in fact hyperventilating when they exerted themselves."

An increased breathing rate during heavy exercise normally helps lower carbon dioxide levels to compensate for lactic acid buildup in the blood. With hyperventilation/over-breathing, deep breathing excessively lowers carbon dioxide levels. In contrast, people with asthma have inflamed airways that prevent air from traveling in and out of the lungs freely, causing the labored breathing.

What the study suggests, Weinberger said, is that children with exercise-induced hyperventilation will not benefit from medication and should stop using the bronchodilator inhalers or other asthma medications prescribed to them when it was thought they had asthma.

Weinberger and Abdel-Hai Hammo, M.D., a former UI resident in pediatrics now at Brown University in Providence, R.I., examined 32 patients, eight girls and 24 boys ages 8 to 18, diagnosed with exercise-induced asthma. The children had a history of shortness of breath or chest tightness while exercising.

However, careful questioning did not reveal a typical history of asthma. Additionally, in some children the use of conventional asthma treatment with an inhaler did not alleviate symptoms.

The adolescents took treadmill running tests while sophisticated equipment monitored their breathing and other vital signs.

The researchers' measurements included analyzing the air each child exhaled. During or after exercise, children with asthma cannot exhale as much air as fast as children without the condition can. Seventeen children had normal breathing function.

They did not have the shortness of breath they had previously experienced, but the symptom was reproduced in the 15 other children.

However, only four of those children had findings consistent with asthma, including cough and wheezing, and a marked drop in the rate at which they could exhale either during or immediately after the exercise test.

The remaining 11 children had tightness in their chest and/or shortness of breath but no wheezing or coughing and no change in their lung function measurements of air flow.

When questioned, the children who had exercise-induced hyperventilation said they felt discomfort while they were pushing themselves generally during competitive exercise.

Other studies have looked at adults who felt chest discomfort while exercising, which raised concerns about cardiac disease, but testing showed the adults in fact had exercise-induced hyperventilation.

"In cases of exercise-induced hyperventilation, people breathe faster than they need to because they perceive they're having difficulty breathing when in fact they're experiencing a normal level of discomfort for an extreme level of exercise," Weinberger said.

He added that children with the pseudo-asthma syndrome of hyperventilation should be told they don't have asthma and taught how to pace themselves through appropriate conditioning and training.

Children with exercise-induced hyperventilation should also stop taking medications meant to treat asthma conditions. A few children in the study previously misdiagnosed with exercise-induced asthma had been put on every type of bronchodilator inhaler without a change in their symptoms, Weinberger said.

"Given how widespread asthma is, it is natural for physicians and people to consider a diagnosis of asthma even if the only symptom is shortness of breath," he said.

"But if a patient has only that symptom and does not respond to treatment with inhalers, then the physician should consider other diagnoses."

With the subsequent addition of even more sophisticated means of assessing exercise physiology in the UI Pediatric Pulmonary Function Laboratory, Weinberger and his colleagues can distinguish between two reasons for decreased carbon dioxide in children.

In addition to seeing the primary exercise-induced hyperventilation reported in the study, the researchers also found that some adolescents simply appear to over-respond to normal discomfort from maximal effort, not realizing that they are "hitting the wall" in their effort to succeed in their athletic effort.

He added that people with exercise-induced asthma should understand that it is readily treatable and should not keep them from taking part in normal activities, including competitive athletics. As with all medical conditions, people should consult their physicians before making any changes in their or a child's health care routine.

Asthma and its connection with hyperventilation have now been clinically proven!

A 20-year study of nearly 600 adults in Switzerland found that the two conditions are connected. Having asthma increased the risk of developing panic disorder 4.5-fold, while people with panic disorder were six times more likely to develop asthma. The study was published in June 2005 in the American Journal of Respiratory and Critical Care Medicine.

My impression is that people with asthma shouldn't be prescribed drugs and steroids for long-term usage. Many adults have similar issues, and I believe that even those benefiting from inhalers in the short term should develop their natural breathing and get off the inhalers as soon as possible. The side effects of pharmaceuticals are nothing but illnesses disguised as mild and benign reactions to the so-called harmless drugs. If you were not sick and had the prescription drug side effect, it would have been called an illness!

"Mike White is a genius at his work. I am 58 and had been suffering from asthma since the age of 5. For the past 10 years prior to my session with Mike, I had been on steroids and fast-acting inhalers. I knew something was wrong with this picture and was so grateful that Mike came into my life.

In just one session with Mike, I was able to get off the drugs completely and learned holistic ways to manage my asthma. It has been a year now since my session, and I am a different person, breathing deep and living a drug-free life. Thank you, Mike White, for making such a huge difference in my life."